“From a well-loved local landmark in Oxfordshire, known as the Wittenham Clumps, Peter Adamson takes us on a journey to discover the hidden histories of the landscape – stories that stretch as far as India, the USA and the Antarctic.

Reading this book is like going for a walk with a friend who, with a novelist’s eye for detail, enthrals you with historical facts, scientific discoveries, literary gossip and political protests. The view from the Wittenham Clumps takes in not only the conservation success story of the red kites and the vulnerability of the glorious beech trees, but also a hedgerow that represents one of England’s most bitter class conflicts and a fusion reactor that generates temperatures greater than the centre of the sun.

Adamson delves into local history to find events of global significance, such as how the son of a local vicar turned a simple tax protest into the American Revolution. Here, too, lived the explorer who travelled with Scott to the South Pole only to be haunted ever after by the decision he took, alone, on the edge of the Great Ice Barrier. The Clumps were artist Paul Nash’s favourite subject; John Masefield wrote one of the greatest of all war poems in the farmhouse below; Rosamund Lehmann and Cecil Day-Lewis notoriously became lovers in a local manor house; and the nearby 1960s council estate was has a history that includes Bing Crosby and Dorothy Lamour.

From the Iron Age hill fort to the Harwell Science Campus, from the Romans, Saxons and Vikings to the arrival of the Conqueror, from the tombs of the Black Death to the ravages of the Civil War, from the Glorious Revolution to the coming of the Great Western Railway, from grim determination of ‘Stop Line Red’ to the dawning of D-Day, the view from the Wittenham Clumps encompasses 6,000 years of history.”

A landmark in time

At the time of their first planting, the saplings that would become the Wittenham Clumps looked down on a country that was getting ready to lead the world into the modern era.

He inherited the Manor of Little Wittenham at the age of twenty-four, travelled with Scott to the South Pole, and was haunted all his life by the decision he took, alone, on the edge of the Great Ice Barrier.

Tubb,  or not Tubb

On a summer evening in 1844, a middle-aged man propped a ladder against a tree on the Wittenham Clumps, took out a penknife, and began carving what would become known to future generations as ‘The Poem Tree’.

No glimmer of God’s hand

The story of Paul Nash, artist of the Wittenham Clumps and the battlefields of Flanders.

A Roman road to reality

It was the first new village to be built in England for two hundred years but quickly became known as a ‘problem estate’. Recovering, Berinsfield better represents life in our country today than the ancient villages around the Wittenham Clumps.

The man who lost America

He was born a vicar’s son in a village below the Wittenham Clumps and became Governor first of New Jersey and then of Massachusetts, where he helped turn a tax protest into the American Revolution.

An affair to forget

The story of how the Manor of Little Wittenham became the stage for one of the most celebrated literary affairs of the twentieth century.

A layer of woollen air

Memorial benches have been placed at many a well-loved spot around the Wittenham Clumps, but the fine stands of spiny teasels are also a memorial – to an industry, and to a man.

Dawn explosions bring down the cooling towers of a power station while wind turbines turn silently on a distant ridge and a fusion reactor generates temperatures greater than the centre of the sun – all within view from Round Hill.

Shockingly, the couple holding hands as they stroll up Round Hill have not even been properly introduced. From coming out to swiping right – the changing rules of courtship and romance.

Beware of the yellow waistcoat

On the dog-walkers of the Wittenham Clumps, an Oxford Professor whose bark was better than his bite, and how the wolf managed to re-brand itself as man’s best friend.

So great a beauty on these English fields

He came to live on these Downs for their beauty and tranquillity. But here, the man who was to become Poet Laureate wrote one of the great poems of the First World War.

The gift that kept on giving

Half a dozen parish churches may be seen from the Clumps. Is there a Mr Collins down there, fawning over a wealthy patron? Or a Septimus Harding wondering if he is entitled to his income?

Of hedgerows and hedge funds

The miles of harmless hedgerows to be seen from the Clumps seem to divide only quiet fields. Two hundred years ago, they divided a nation.

Part 3: The point of daffodils…

Poets may spurn a scientific approach to beauty, but the wildflowers of the Wittenham Clumps are only the more wonderful for reading Loren Eiseley’s classic 1957 essay ‘How flowers changed the world’.

Thinking on your feet

Almost all visitors to the Wittenham Clumps for the exercise. But why have so many philosophers, poets and writers believed that we also think better on our feet?

The wind beneath its wings

The red kites again ride the skies over the Wittenham Clumps, proclaiming a conservation success story. Looking down tells a different story.

The sermon on the Clumps

A tree metaphor that went wrong – and the discovery that trees can send and receive messages, redistribute resources, and look after each other via a wood wide web.

A frail grip on the earth

Gratitude to our glorious beech trees, memories of their role in a great aesthetic controversy, and fears for their future.

A history of England as seen from Wittenham Clumps

From the Iron Age hill fort to the Harwell Science Campus, from the Romans Saxons, and Vikings to the arrival of the Conqueror, from the tombs of the Black Death to the ravages of the Civil War, from the Glorious Revolution to the coming of the Great Western Railway, from grim determination of ‘Stop Line Red’ to the dawning of D-Day, the view from the Wittenham Clumps encompasses six thousand years of our island’s history. 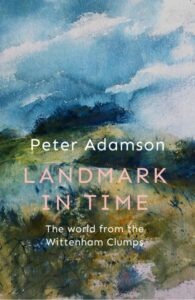 Cover painting of the Wittenham Clumps by kind permission of the artist, Rod Craig.

Watch two-minute video of the artwork being created