Many years later, on the balcony overlooking the canal at Comácchio, he had dwelt on those hours, eventually slipping into the vividness available only by loosing the ropes and casting out into the stream.

He is uncomfortable. More and more he is uncomfortable. His discomfort can even take physical form as one part of him or another rubs or hurts or feels unusual pressure. Often, he has to shift his position. He is uncomfortable even here, sunk into the armchair of a hotel bar.
Why had he suggested this place? It is dark; deliberately dark. Its name is the Nocturne Bar. Ultra-violet light leaps from the cuffs of his shirt, and, for all he knows, the whites of his eyes. He had once been summoned here for a drink by a visiting relative from Milan.

It is already five minutes past. Obviously she is not coming.

He can be quite comfortable in his rented room. He can be comfortable in his unmade bed. He is almost always comfortable in the morning with his coffee at the table by the window that opens onto the fire escape. He can even be comfortable in a railway carriage if at the beginning of a journey of reasonable length, when the possibility of missing the train, or boarding the wrong one, is behind him, and when predictable, uninterruptible time stretches ahead. He should have known some little wine-bar in Soho with worn floorboards and unmatched tables and chairs. Not this temple to a meaningless sophistication, with its ultra-violet light and its piped piano adagio.

He is also comfortable at his desk in his office, with his translations and proofs spread out before him. He even feels a comfort in having his knee pressed up against a radiator that rumbles and shudders all day long and sometimes registers a tectonic clank, connecting him to the bowels and bones of the building.

Partly, he supposes, it is his English. Using another language introduces an additional layer of potential panic into his dealings with the world, distracting him when he needs all his attention. It can even lead him in directions he does not want to go, say things he does not mean to say; grooves worn by the phrases he is confident of leading him away from his thoughts along meanings of least resistance. And for one who is constantly circling his arms to stay balanced on the edge of confusion, embarrassment, the momentary doubts and delays of another language can easily push him over.

Another silhouette enters, pauses to adjust to the light, or lack of it, and dissolves into the darkness. Maybe he should have taken the table nearest the entrance. He drinks the melted ice-water in his glass and lights another cigarette.

Of all the phrases he has come across in English the one that first fastened itself on him was the one about sleep knitting up the ravelled sleeve of care. He had responded to it viscerally, thought of it every night. Only it’s not just sleep. Any period of comfort, in which to re-adjust, will do. Later he had learnt that the word now is unravelled; but after having to accept that valid and invalid are opposites whereas of course valuable and invaluable are not, he has ceased to worry about such things.

Another silhouette. Another pause. Another soul dissolving into the gloom. A waiter appears to collect his glass, the napkin over his forearm a ghastly glow. He orders another scotch.

It isn’t only the language. Even in Milan his islands of comfort had been getting smaller. The problem was all the things that could only be partly seen and partly absorbed, including even the pieces of himself. That, and the lack of anything that related any of it together in a less than arbitrary way. Small wonder if there was a lack of fit between himself and his world, if it was all scrapes, hurts, bumps, things that stuck in. He is aware that the problem is not only external, that the fragments and uncertainties fell on fertile ground for the cultivation of luxurious tensions, and that all this might be described as an excess of tenderness. His drink arrives from the gloom.

Quarter past. Does he want her to come? Of course he does. This is what you do. And she had had a lilt to her that he could see might become captivating. On the other hand, his level of discomfort would surely rise.

There was another line in English that had plunged itself into him much more deeply. ‘To see things steadily and see thing whole’. No sooner had he read the eight words than they had elicited a kind of Grail yearning. What was implied here of the comfort he sought?

Again, a silhouette in the arch of the entrance, a woman. She pauses, moves towards him, growing less distinct. Their eyes meet for a second; he brings both hands to the arms of the chair and begins a smile. She looks away and passes through to the next alcove. The arm is too high for his elbow to rest on naturally, or to allow him to bring the cigarette to his mouth.

It was in the Nocturne that evening, waiting, that one of his truths had begun. His Grail was an illusion. It offered a chimera of comfort, a false fit. It was a nineteenth century idea, implying a single admissible perspective, an absurd completeness of knowledge. It could surely lead only to unfounded certainties and self-satisfactions destined to topple, with age, into all kinds of bigotry and myopia. Impossible to see things steadily and see things whole. Impossible to see anything in the Nocturne Bar.

The trouble with illusions is, their lights cannot be entirely hidden. Compared to seeing things steadily and seeing things whole, his present way of seeing is bound to be uncomfortable.
He senses another figure moving towards him, lowering her head to alter the angle of the light. He does not look up.

Half past. Did she ever mean to come? Or has she come and gone?

He is comfortable when playing the piano to himself.

All these years later, on the balcony at Comáccio, he would not say he had solved the problem. The acutest discomforts had of course softened. He had learnt that there are no humiliations from which it is impossible to recover, or circumstance with which it is impossible to cope. But the deeper disturbances, the instabilities of self and of perception that engender anxieties, tensions, had taken a little longer. And would take a little longer still.

Below him light reflects up from the canal like a second sky. A broad-beamed boat is ferrying the day’s half dozen tourists as far as the eel nets. He watches it push against the rudder in a wide slow arc, rippling the reflection of the bridge. At least he had resisted the allure of seeing things steadily and seeing things whole, moved beyond it even as a need. The quest for understanding was undimmed. But he had seen a little more of what he had first glimpsed that night in the Nocturne, that this did not require a fixed view of himself, or of his experience, or of his world.

Comfort had not immediately increased. But a re-direction of effort had followed, so that eventually he had learnt something of the arts of re-writing his own story, of the redescription of his past, of seeing variants of the story not as competing versions of reality but as instruments of self-alteration. Knowledge must always be fresh, he has decided, must constantly be perceived anew. He is tempted to say that knowledge must always be made up.

Later still, and by such means, he had come to perceive that there was a degree of unity even in the partial and the unstable. Looking back, there was a mellowness there that had not been evident at the time, a certain evenness of tone, a harmony of sorts.

His grandson runs out onto the balcony holding a present, a digital camera which he points down at the painted boats on the water below. His father follows, kneeling behind the boy, confining him in his arms, showing him how to keep the camera steady by resting it on the balcony rail.

The old man offers encouragement to the boy to press the shutter. Even the hours in the Nocturne he sees now in a different light. Not steadily or whole, certainly, but with a kind of comfort. 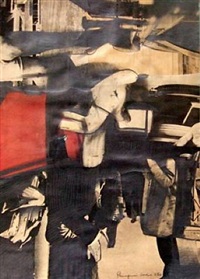 Comfort was written at the invitation of the Montrasio Gallery in Milan as one of three stories - the others by Mattia Signorini and Marco Mancassola - for the catalogue of a retrospective exhibition - Bepi Romagnoni (1930-1964). The text accompanied the series of paintings titled London Story.