In 2001, the Water Supply and Sanitation Collaborative Council (WSSCC) asked P&LA to advise on making sure that the issue of clean water and safe sanitation was not ignored at the World Conference on Sustainable Development (the Earth Summit, Johannesburg, August-September, 2002).

The P&LA contribution focused on:

The result was the ‘It’s the Big Issue’ campaign which confronted delegates and media from the moment they arrived in Johannesburg until their departure ten days later.

‘It’s the Big Issue’ flyers and adverts greeted conference arrivals at the airport; street light ads and banners lined the route to the city; leaflets, posters, drinks mats, and mirror stickers were found by delegates in bathrooms and toilets of hotels, restaurants, and all conference venues, often distributed by volunteers wearing WASH T-shirts and caps. The two-minute ‘It’s the Big Issue’ publication (see below) was placed before every delegate and media representative while a walk-through WASH exhibition was erected at the two main conference venues.

View pdf of the ‘It’s the Big Issue’ publication. 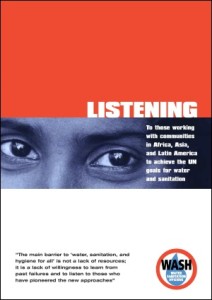 As a follow up to the WASH campaign, P&LA proposed to the WSSCC the idea of a LISTENING report.

Accordingly, the LISTENING report interviewed 38 individuals from Asia, Africa and Latin America – community and NGO leaders, engineers, sociologists, doctors, government ministers, and local government officials – all with many years of experience and commitment to the cause of ‘water, sanitation and hygiene for all.’

The introduction drew together some of the fundamental lessons learnt and gave voice to some of the most strongly felt concerns of practical pioneers in water, sanitation and hygiene in some of the world’s poorest communities.

Logo and acronym developed for the Johannesburg campaign