The speech was delivered following the showing of the opening film – ‘341’ – and the film and speech together made the case that a commitment by the political leaders present that day could bring about a revolution in child health and survival – at an affordable cost.

Your Excellencies, ladies and gentlemen, children . . .

Now we know why there is a Summit for Children.

One week ago, over a million candles were lit for the success of this Summit — each candle a prayer, in whatever religion, that today will be a turning point in the lives of children.

A turning point for children everywhere, but especially for the children of the quiet catastrophe.

Never before have these children taken center stage. Never before has their voice been heard in a forum such as this, but as the Executive Director of UNICEF, it is my prayer that, with this Summit, their time has come.

It is a prayer that this Summit will make the 1990s into a decade of doing the doable for the world’s children. And the new horizons of the doable are defined for us in the Declaration and Plan of Action we will be considering today.

It shows that child deaths can be cut by a third — and it shows how.

It shows that child malnutrition can be cut by half — and it shows how.

It shows that a better quality of life can be achieved for our children — and it shows how.

To lead this effort, we here today can raise a new standard for children of the years to come, and on that standard, on that banner, is writ large a principle — the principle of a first call for our children, the principle that children should be the first to benefit from mankind’s successes and the last to suffer from its failures.

And on behalf of UNICEF and the world’s children I also want to thank you — you who have found time for the important in the midst of the immediate and have made this the largest gathering of world leaders in history.

Your Excellencies, there could be no greater gathering, and there could be no greater cause. For we are confronted here today with the noblest goal which mankind could ever set for itself — protection for the lives and the normal growth of all the world’s children. It is within the power of those gathered here to achieve that great goal in our time.

And it is within the power of those gathered here to make this Summit into a turning point, not only for the world’s children, but truly for us all. For it is on how we bring up our children that our civilization is measured, our humanity is tested and our future is shaped. 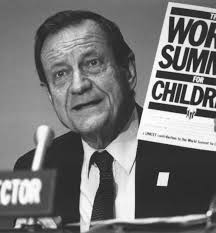