… though we cannot make our sun
Stand still, yet we will make him run.”

Thin White Line was written as a thank you to my son, Dan, for a great day out to hear Bruce Springsteen and the E-Street Band play to 60,000 people at London’s Wembley Stadium, Sunday, June 5th, 2016.

As Springsteen fans will realise, the words of Thin White Line are 95% Springsteen’s, drawing on and arranging phrases and lines from the songs on The River album plus Thunder Road and The Promise.

So with thanks to Dan and apologies to the Boss: –

Tomorrows fall in number, in number one by one,
you wake up and your dyin’, you don’t even know what from,
point blank, point blank, you’re walkin’ in the sights,
through rooms once bright, now dim with coming night,

just another loser in the fight that no-one wins
with a trail of broken promises and half-forgotten sins,
like the other fallen angels calling strangers in the street,
hear them calling, hear them calling, crying in defeat.

But darlin’ we had our day, had our say, out on the street
and the cool of the night takes the edge off the heat,
and maybe all those useless dreams were better than the lies,
though the waking’s still a hit, point blank between the eyes.

So we’ll do our time, do our time and fade away
and learn to sleep at night with the price we pay,
soon everything we’ve known will just be swept away,
it’s just another kind of Independence Day.

But darlin’ I don’t wanna, don’t wanna fade away
like the tired canvas scenery in another man’s play,
roamin’ empty hearted in the heat of the night,
just another useless memory holding you tight.

And there’s ghosts in you, too, baby, ghosts there in your eyes,
point blank, point blank, right between the lies,
you don’t wanna tear the gown that’s not yet worn
and vanish without yellin’ in the lonely cool before the dawn.

So put on your best dress baby and fix your hair up right,
I still got a little faith that there’s magic in the night.
Point blank, point blank we’re walking in the sights,
but we ain’t gotta take what they’re handing out tonight.

I still got some beer and the highway’s still free,
and I still got you and you still got me.
We got another chance to make it real tonight
and I’m tellin’ myself it’s gonna be all right.

Darlin’ there’s gotta be, gotta be just one more day,
and you gotta stand and fight for the price you pay,
and be tough enough to play the game they play
or be just another stranger gettin’ blown away.

So open up them engines, let ‘em roar,
she’s a hot steppin’ Hemi with a four on the floor.
Roll down the window, let the wind blow,
the night’s bustin’ open we’ve a long way to go.

We can quiet down the sadness, baby, quiet down the pain,
with the radio playin’, tyres rushin’ in the rain.
We can dream a better world, hearts not yet turned to stone
but baby we ain’t rough enough to whip the world alone.

We’ll haunt this dusty road, darlin’, engines roaring on
‘til the blacktop ends and the desert breaks the song.
What if we never lived the dream or ever paid the cost,
or carried the broken spirits of all the other ones who lost?

I ache, I ache, for that lonely ribbon in your hair
and for knowing I’m the man for whom you put it there.
We’ll take the ride together darlin’, lock your hands in mine
it’s a long dark highway and a thin white line. 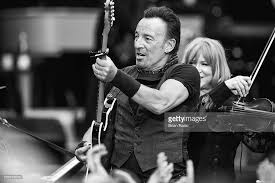