It took me into a world I knew very little about and opened my eyes to its beauty and interest. What I especially admired was the way the characters were both representative of large ideas and yet also fully human … it’s a huge achievement” – Alain de Botton”

“I was captivated by the atmosphere but it was the sheer thoughtfulness of this novel that interested me … one of the most consistently intelligent and fascinating novels about what goes on in people’s minds that I’ve read for a long time. Quite mesmeric in its hold” – Margaret Forster

Set in Colombo, Sri Lanka, Facing out to Sea tells the story of two lives — and two worlds – colliding. Vijay Vijayaratne is a waiter who spends his days in the quiet, elegant verandah restaurant of an exclusive seafront hotel – and his nights amid the noise and squalor of a Colombo slum. Clara Lane is a Western tourist whose stay in the protected setting of the hotel makes her curious about the raw life of the city outside. As the two come to know each other, the contrast in circumstance sets up a shock wave that reverberates beyond their own lives. 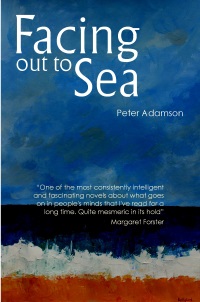 First published by Hodder and Stoughton in 1996, Facing out to Sea is now available as an e-book for Amazon Kindle.
To buy, click one one of the links below